A €5000 scholarship awarded annually to a North American undergraduate student enrolled at Jacobs University. The scholarship is given in honor of Claus Halle, founding Chairman of JUFA, and is awarded from an endowment.​ 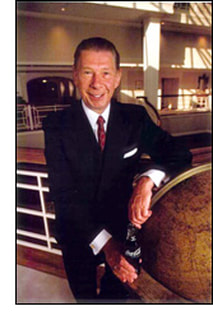 ​Claus Halle was the founding Chairman of JUFA, and his leadership played a very important role in its later developments. Halle was a superbly organized and visionary international businessman who, later in his career, played an important philanthropic and leadership role in a variety of cultural institutions, not least of which were the roles he played as a Governor of Jacobs University and as the founding Chairman of JUFA. For his dedication and lifetime efforts Claus Halle was awarded the Commander’s Cross of the Order of Merit by the President of the Federal Republic of Germany and in 2001 he was honored as the Georgia Philanthropist of the Year. On the website of the Halle Foundation, which he created for his philanthropic activities, one finds an excellent overview of his business and cultural activities: http://www.thehallefoundation.org/abouthalle.html
The funding he provided allowed JUFA to create the Claus Halle Scholarship, a permanently endowed scholarship to provide financial support for an American student studying at Jacobs. Claus Halle lived his life seeking to expand understanding and respect around the globe - and this scholarship is intended to inspire the same in a new generation of leaders. The first scholarship was awarded to Jessica Ice in 2007 and has been awarded annually ever since.